Everything about the Samsung Galaxy A20e White

This Samsung Galaxy A20e White can be seen as the successor to the Galaxy J4+. Samsung has decided to drop the cheaper J-line smartphones. Among other things, this white pearl from the manufacturer offers a dual camera on the back, of which one lens can take pictures at a wider angle.

On top of that, the device comes equipped with a fingerprint scanner and a 5.8-inch screen. The small notch at the top of the display makes room for the front camera. The storage space can be expanded with a microSD card, and there's also room for two SIM cards, so you can be reached on two different phone numbers!

The Galaxy A20e has an elongated ratio that makes multitasking just a little bit more pleasant. Another advantage is that the device is relatively narrow and easier to handle with one hand. Most of the front consists of the screen, which contains a small notch at the top that hides the front camera.

This white Samsung A20e comes equipped with two cameras on the back that you can use to shoot great pictures. These pictures can be shared directly via WhatsApp or posted on Facebook. It's also possible to take pictures with an extra wide angle, so you can capture even more in one picture.

Fast charging and battery for the whole day

You won't have to worry about the battery life with this device, because this Samsung device features a 3000mAh battery. This battery makes it easy to get through the day, even if you use the device more intensively. If you do need some extra power, you can quickly recharge the A20e White via the USB-C port.

The device comes with a standard 32GB of storage space, which is more than enough for a lot of people. If you do need a bit more space, you can easily place a microSD card in your device. On top of that, there's room for two SIM cards, so you can be reached on two phone numbers with only one device in your pocket.

Secure the device in several ways

This white Samsung Galaxy A20e runs on Android 9.0 Pie with an added Samsung skin. This means the appearance of Android has been changed a bit, and the device comes with several pre-installed Samsung apps. You can download apps, games, and widgets from the Play Store.

The user manual is not included but can be downloaded or viewed here: Dutch user manual. You can also download an English version: English user manual.

With normal use, we guarantee that your phone will work properly throughout the full warranty period. If something goes wrong, Gomibo.co.uk and Samsung will make sure to help you out!

How do repairs at Samsung work?

Show all accessories for the Samsung Galaxy A20e White

Accessories that go with the Samsung Galaxy A20e White Show all accessories for the Samsung Galaxy A20e White 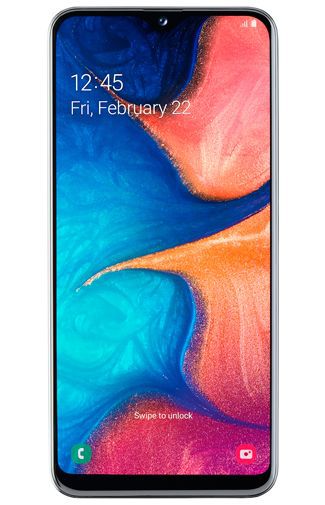