Currently out of stock

If it comes with a charger (see specs), it will be supplied with a 2pin EU mains charger.

EU sourced phones will have a full warranty and are compatible with all IE & UK networks.

The Apple iPad 2019 WiFi 32GB Gold is currently out of stock and therefore not available in combination with a contract.

Currently out of stock

We're currently unable to stock the Apple iPad 2019 WiFi 32GB Gold. Our customer service department doesn't know when this product will be in stock again. We recommend choosing a different product.

Everything about the Apple iPad 2019 WiFi

Description of the Apple iPad 2019 WiFi

In September 2019, Apple announced the seventh generation of the iPad. The tablet looks like its predecessor from 2018, but has been improved in several areas. It features a large, 10.2-inch screen, while its predecessor has a 9.7-inch version. You can choose between a 32GB and 128GB storage space model.

The device also has Touch ID, so you can secure your apps with your fingerprint. Like the iPad 2018, this one is equipped with an A10 Fusion chip, an energy-efficient processor. The tablet runs on iPadOS 13, an operating system by Apple that has been optimized for iPads.

This iPad is available in black, silver, and gold, and is perfect for watching films and series. The 10.2-inch display is nice and big for a good viewing experience. The picture is also very sharp. At the bottom of the screen, you'll find a fingerprint scanner with TouchID, so you can unlock your iPad with your fingerprint.

You can use the iPad 2019 in many different ways. For example, the device comes with a Smart Connector. This connection enables you to connect an external keyboard. The iPad also supports the use of an Apple Pencil, so you can take hand-written notes.

Out of the box, the device runs on iPadOS 13. iPadOS is the Apple operating system that was optimized for iPad use. The operating system works with the processor perfectly, because both were developed by Apple. Of course, you can download apps in the App Store.

Accessories for the Apple iPad 2019 WiFi

Show all accessories for the Apple iPad 2019 WiFi 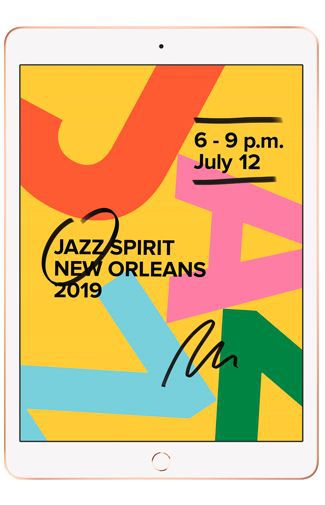